Isaac was three months old on Saturday.  I can’t believe how fast the time is flying by, and how quickly he’s growing.  He’s now 14 lb 11 oz, and is changing every day.

He rolled over for the first time two weeks ago – from his stomach to his back – and does it about once a day when he’s placed on his stomach.  He doesn’t really enjoy the sensation too much – probably because every time he does it his little arms fly up when he lands on his back and he always ends up with his fist curled around a handful of his hair, yanking hard.

We’ve been in the middle of a nasty heat wave here in Maryland.  Last week, we had temps in the 100’s, with the heat index into the 120’s.  We usually aim for a walk a day, but the air quality is very poor in that kind of heat, almost dangerously so, and we’ve had to stay inside with the A/C blasting.

As soon as temps dropped below 90, Isaac and I grabbed a few minutes outside on the deck.  He loves being outdoors, loves being in the sun and staring up at the trees.  Gotta make sure he gets his Vitamin D :). 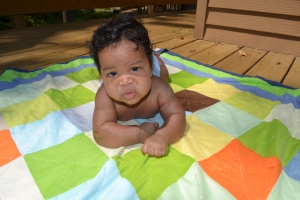