Isaac turned 14 months on Saturday.  Our little guy is still changing so much by the day – he’s become such a little ham, such a wild little thing, full of energy and fun. 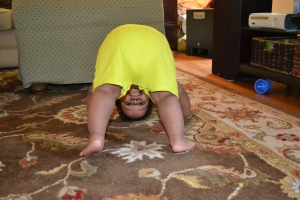 He’s really exploded with the sign language and some new words lately.  He’ll mimic pretty much anything you say, if you pronounce it clearly enough (and if he thinks it’s worth repeating).  He has a couple pictures of animals over his changing table, and his favorite are the bunny rabbits and zebras.  Every time I change him, we talk about the animals, and I say “zzzzzzzzzzzebras!”, emphasizing the “z” sound as much as possible.  He loves to repeat “zzzzzzzaaaa!”  He also says ball (“baw”) and Uncle Ben (“Beh”) – usually yelling this one up the stairs as he hates when Uncle Ben goes upstairs without him.  His “tee-tat” for cat has just turned into “tat” and he now says “daw” for dog.  He’s getting more clear about when he uses Dada and Mama now, too.  “Mum” has replaced Mama as his catch-all for more, I want, give me some now! etc.

He was so interested in signing that we invested in the Baby Signing Time videos (they were on sale, 1/2 off!), and he watches one every morning, while I try to pry my eyes open for the day.  I wasn’t planning on letting him watch TV regularly, but these videos are awesome.  After just a week, he picked up so many new signs!  After a couple weeks, he’s regularly signing:  shoes, more, eat, baby (his absolute favorite sign), milk, dog, car, all done, sleep, hat, drink, cracker, airplane, ball, bear, books, brush teeth, please, and thank you.  It is the coolest thing to tell him to go pick out his shoes, see him walk over to the closet and pick up his shoes and then do the sign.  SO COOL.  It’s especially sweet to see him sign baby, which he does randomly throughout the day, always with a huge smile on his face.  And he loves doing “thank you” too!  I just love that he can start to communicate with us more.  It’s amazing! 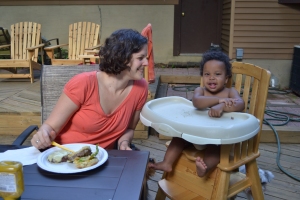 He’s also learned to locate his nose and toes, and his hair if you ask him where they are.  After pressing the end of his nose, his finger usually ends up IN his nostril…we’re working on that one, haha.

He has gotten so LOUD lately!  He yells, all day long.  Not in a whining or upset way – I think he just likes the sound of his voice.  And when he does something that we cheer for and say “Yay!”, he’ll get really excited and clap and yell for himself.  Oh my gosh, which reminds me of the funniest thing that happened this morning.  He was eating a cracker (or what we call cracker – a raw dried coconut/date/lemon “cookie”), and dropped it on the floor.  He was trying to pick it up again when the doggy swooped in and nabbed it.  He was so upset he started yelling and swinging his toy hammer around at the dog!  I was trying not to laugh, oh my.

He’s definitely gotten more clingy lately.  He had a couple instances of stranger danger recently – mostly of someone he doesn’t know coming into our house (the plumber, UPS guy, our social worker), and if I’m not holding him or at least right there next to him, he will yell out, startled, and then start crying.  Poor guy.  He isn’t scared of strangers when we’re out in public though.  At HomeGoods, he walked right up to some guy shopping with his wife, and grabbed the hem of his shorts!  He’s always making friends in the park, or in Target.  But he is definitely more clingy.  He will follow me around the house all day long, and if I go upstairs or outside without him, he immediately starts wailing.  I think it has something to do with the teeth that have been threatening to break through for at least a month now.  Those darn things just won’t budge!  Or it could just be that he’s getting so mobile that he’s realizing I’m not always going to be right there next to him.

And mobile, he is.  Man.  He’s walking so well, he’s practically running now!  He can move pretty quickly – almost faster than me now, haha.  He mastered the stairs long ago, and has gotten pretty good at pushing his stool up to things and climbing up (on chairs and the ottoman mainly).  He’s pretty adventurous, but cautious at the same time.  He is very careful about where he places his feet when he’s walking – he can see a crack in the pavement and step over or go around it.  He’s very cautious about ledges and is super careful around the edge of our deck. 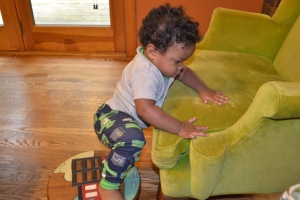 He reminds me a lot of Chris, actually.  Very cautious, bright, outgoing, and musically inclined.  He must take after his Daddy :).  Of course, there’s no telling what music he’ll respond to.  He still loves (and sings along to) Barbara Ann by the Beach Boys.  In fact, he’ll ask for it by bringing me the remote to the tv and saying “Bababa”.  He heard it come on in some store the other day and got so excited!  He started groovin’ out to some James Brown in the car this past weekend (Get on up!), and he definitely likes my oldies Pandora station.  But he’ll also start bopping to weird stuff like the Beegees or some random pop songs.  Mom and I were having lunch in Baltimore a couple weeks ago and the restaurant was playing New Orleans Jazz.  He was going nuts, he loved it so much!  Chris found a cute little piano for him that came with a microphone, and he likes playing on that and wailing into the mic.  Chris plays the guitar, banjo or mandolin pretty regularly, and Isaac loves “helping” Daddy play the songs.

He’s been working on the transition to one nap for almost a month now.  He hasn’t taken two naps in weeks, unless we’ve been in the car in mid-late afternoon and he’ll catch a few zzz’s that way.  He’s dropped his afternoon nap altogether, which suprises me.  I always thought babies dropped the morning nap instead.  I’ve been trying to push his morning nap later and later so he’ll get a proper bit of sleep mid-day to last him until the evening.  So far it’s working pretty well.

We’ve been planning fun activities for the afternoons to fill the really long stretch of time between nap and bedtime.  We’ve gone to the airplane park near our house to watch the planes land and go on the slide, yesterday we went to a really cool petting farm, and today we’re driving to Annapolis to visit the Cathedral there and walk around the waterfront.  Isaac loves to get out and go, just like his Mama :).

Our little guy is obsessed with his belly button.  He spends most of the day walking around with his finger in it, and if I’ve put him in a one-piece outfit, he’ll spend a lot of time searching for it through the cloth before he gives up.  He plays with it while he’s nursing, which is nice because it keeps him from playing with the tube or yanking at my skin or hair.  He’s still pulling hair, but we’ve all learned not to lean in and let him get a handful.  He gets overwhelmed with his emotions sometimes, and when he’s particularly cuddly he’ll lean in to give a kiss and hug and then will get so wound up after that he hauls off and smacks your face or pulls your hair.  I can usually see it coming and avoid it, but other than telling him no and putting him down when he does it, I’m not sure how to teach him that he’s not allowed to beat us up!

Nursing is still going well.  Isaac loves to nurse, and is now able to tell me when he wants to (well, most of the time).  I love that he’s able to communicate what he needs!  I still love being able to comfort nurse him – with all the bumps and tumbles a walking toddler gets into in a day, it’s nice to have a quick way to calm him down and make him feel better.

He’s eating a lot better these days.  We usually eat rather spicy meals, and I was having a hard time cooking a separate meal for the baby, so I just decided to tone down our meals (not bland, but not burn-your-mouth) and save myself the hassle!  With a houseful of Cajuns and my hubby who loves spicy foods, it’s an adjustment, but it’s not the end of the world either.  We still use plenty of spices and herbs, and Isaac can now enjoy the food with the rest of us.  He’s eating meat a lot better than he was, although he’s still spotty on vegetables.  I make a mean butternut squash pancake with almond flour (butternut squash pureed with chicken stock, eggs, almond flour, salt) and he loves those in the morning with some maple syrup, plus he’s still eating eggs scrambled in butter or coconut oil as well, and some fruit.  Lunch is usually more snacking – he refuses to sit in the high chair and eat mid-day, so I usually follow him around the house with some cheese or “crackers”, dried or fresh fruit, or yogurt.  He refuses to be spoon-fed, but still loves “drinking” his yogurt out of cup all by himself.  He’ll eat pretty much all afternoon long as long as I keep giving him things to munch on, and then he eats a pretty decent dinner of some kind of meat, some kind of veg, fruit, and finishes off with either yogurt or lately, homemade tapioca pudding made with coconut milk and sweetened with honey.

There is just so much fun to be had when you’ve got a toddler.  He’s constantly making us laugh!

Yes, Isaac keeps us on our toes, but I love every minute of it!