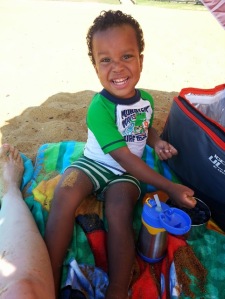 Someone will actually smile when I ask him to now!  Whoohoo!  He doesn’t always smile *at* the camera, but hey, I’ll take what I can get.

Isaac is 28 months now, and I wanted to write down some of the cute things he’s doing and saying lately, before I forget.

He’s still enamored with Peter Pan, and regularly goes looking for Tinkerbell underneath the couch cushions.  Several times a day, I’ll hear him throwing the pillows off the couch or crouching down to look under the ottoman for the little fairy, who is apparently hiding somewhere in our house.  I’ll be pretty sad when this phase passes…it’s so darn cute!

He’s really taken to wearing hats lately, especially his purple LSU hat.  He tells me, “Wearing a hat like Daddy!” and never forgets to remind me that Uncle Ben gave him that hat :).  Some days he doesn’t even want to take it off to nap, and will tell me “Wear hat and nurse.”  Haha.

He loves “helping Mommy drive”.  When we pull into the driveway, I’ll unbuckle him and he’ll climb into my lab and help me drive the rest of the way.  He gets to honk the horn once when the car comes to a stop in front of the house, and will tell me “Don’t honk horn, it’ll scare the neighbors!” as we’re coasting down the driveway.  He also loves “starting the car” and his job is to get the keys when we’re ready to go anywhere.  He’ll push the chair over to where they hang on a hook, grab them and climb in the front seat and stick them in the ignition, before climbing back into his seat to get buckled in.  It adds a few minutes to our departure, but I just try and build in a little extra time when we leave.

He’ll randomly tell me that he’s doing things, “like a boy”, or “like Daddy did”.  And he’ll eat watermelon, spitting the seeds out into his bowl and look up at me proudly and say, “spitting seeds out just like Mommy did”.  Haha.  Yep, that’s me, all ladylike and stuff ;).

When he helps out around the house or picks up his toys, or completes any task, we’ll hear him tell us “Doin’ it!”, which cracks me up.  He’s very good at seeing things that need to be picked up or cleaned up and taking care of it (well, as much as a two year old can).  Mimi dropped a bowl on the tile floor the other day and as soon as he saw the ceramic shards all over the floor, he hopped up and disappeared around the corner of the counter.  He came back holding the dustpan and little broom and got down to clean it up!  I was astounded.  He’ll see a piece of lint on the floor and run and get his little broom and try and sweep it up.  I told him to get ready to go this afternoon, when we were going to run to pick up some more charcoal, and he jumped up and started sweeping all of his train set pieces off the table and into the drawers, telling me “Putting the train away first!”.  Uh, okay, sure!

He asks a lot of questions, but they’re mostly rhetorical.  Or actually, he asks you a question that he would like you to ask him.  “Where ya going?  What are you lookin’ at?  What you doin’?”  So I’ll turn it around and ask him, “Where are you going?” and he’ll tell me “going outside to play”.  Usually, if I hear “Whatcha doin’?” he’s about to get into something and is basically telling on himself :).  He’ll park himself in front of the fridge and ask me, “Whattya want?”, meaning he wants me to ask him what he wants out of the fridge.

When he doesn’t want something, he’ll tell me “can’t want it”.  This started in July when he was taking a very strong herbal remedy to help combat the Lyme disease and he didn’t like the taste.  It cracked me up, because he would say it so forlornly like, “I know I need it, but I just can’t want it!”.  Haha.  Poor kiddo.  He uses it rarely these days, because honestly, there’s not too much he doesn’t like to eat or drink :).

He’s just recently started saying, “dat’s mines” (that’s mine) when he has something that is decidedly not his, or when I try and take something away that he’s not playing gently with.  He doesn’t really say it loudly or defiantly – he says it almost under his breath, and it reminds me of a miser sitting on top of a pile of gold, “It’s all miiiiiiiine (evil cackle)”.

He usually alternates between saying “his” and “yours” when he means “my”, but the last couple of days I’ve heard him experimenting with saying “Dat’s my daddy” instead of his usual “Dat’s yo (your) daddy”.  When we’re out and about running errands or wherever, he’ll point out the men saying “Dat’s yo daddy” and we get some pretty funny looks, so I usually respond with “That is his daddy” (if he’s got a kid with him), or “That’s someone’s daddy” if it’s just some random guy.  He doesn’t do the same thing with mommy – he’ll tell me, “Nursing his mommy” when he climbs in my lap, or “This is Isaac’s mommy”.  He is starting to notice all the kids’ mommies and daddies at our playgroups though.  I’ll tell him who’s going to be there and he’ll ask me “And Natasha’s mommy, too?”.  We had a party on Friday and I got home after everyone had started arriving.  He ran outside and when I asked him who was here, he said, “Lots of mommies!” and then, “The guys are here!”.  Every guy is a daddy and every woman is a mommy, in his mind.

He’s told me a couple times when I try and give him another bite of something, “Have to finish what’s in my mouth first”.  And when I give him some raisins or nuts, he’ll tell me “Need a handful”.

I took him for a haircut last week and had told him that Meghan was going to cut his hair (she’s been giving him haircuts for over a year now and he loves her!).  We got to Baltimore early, so we walked a couple blocks down to the waterfront to a park to see the boats.  On our way back, he told me “Dragon’s gonna cut Isaac’s hair”.  I was like, uh, what?  Meghan=Dragon apparently.  He called her Dragon the entire time, which she loved ;).  I corrected him every time, but even now he’ll reach up to scratch his head and then tell me, “Dragon cut my hair.”  Haha.

He has been extremely cuddly these days.  All day long he’ll give me hugs and kisses, running up and bowling me over sometimes.  He’ll squeeze me around the leg when I’m busy at the stove, kissing and hugging my calves.  He’s breaking out the “I wub you”s more often too :).

As I mentioned in the last post, he’s pretty much speaking in full sentences these last few days.  I’m always in awe in the moment, when I hear something come out his mouth that sounds so old for a two year old!  I need to start carrying a notepad around though and take notes, because I can’t remember things 10 seconds later.

Probably my favorite thing though, is that he’s started telling “stories”.  He’ll talk for several minutes, recounting his day, or telling me about how he hit the ball with the bat and then Daddy chased it and they threw it back and forth and he caught it and then he threw it in the woods and Daddy had to get it and on and on and on.  I can usually catch the gist of the story and all the key words, but there’s a lot of gibberish in there too :).  It’s so much fun being to converse with him!

I wish I had more pictures to share, but between potty training last month (he was naked most of the time) and all the sickness, I haven’t gotten the camera out enough lately.